Pt 1 - The Birth of Motor City Hoo Doo - What is special about Detroit anyway?

This article is a reprint from a former newsletter but the sentiments endure. 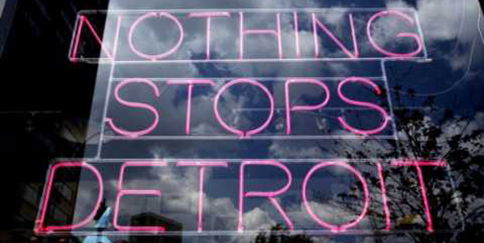 Every place has a spirit made up of the people, the environment, and the history ofevents.  Detroit is a place that is filled with spirit and seems to be a place of  magic.   It may not seem like it with all the decline Detroit has gone through, but Detroit has some badass power.  It survives, we survive.

Back in 1701, Antoine Cadillac, the founder of Detroit was foretold about a run in with the “Nain Rouge”, a little red devil and if he didn’t treat this devil with respect he would doom his greatest creation, Detroit, to struggle The prophecy warned that if the warning wasn’t heeded the city would burn every 100 years.   Detroit has “burned” either through tragedy or economic corruption every 100 years or so since then, yet it always rises from the ashes by the power of the people who live here.

The Masons designed the city to align with the Kabbalistic tree of life , rooting it in magic and power.  The area continued to attract more magic to it through immigration and the northern migration.    In the early 1900s, during the South’s drought and the rise of the auto industry, workers flocked to Detroit and during World War 2 the strength of manufacturing just grew.   Those who came to Detroit were people of the earth, people who carried on the folk magic traditions of their people.   It started to blend here and become part of the spirit of Detroit.   The Black, Irish, Polish and most recently the Arabic folk traditions seep into this land and keep the spirit of Detroit alive and powerful.

When Patty, Renee and I were spending time cleaning and cleansing Coventry to power it up and rebuild from the 2001 downturn and we started talking about our “Detroit Voodoo” and how nothing can get us down.    That quickly turned to our “Motor City Hoo Doo” and we all felt the powerful shift.  In 2004 there was little in print about hoodoo and conjure, yet this is the magic that both Renee and I had learned in conjunction with our Wicca training.   Renee, a priestess in Santeria, confirmed for me that the reason why my magical workings did not fit into the Scott Cunningham school of magic is because I worked conjure and always had.

Renee has since moved onto other endeavors, but that time when we reawakened our conjure roots, worked with intuition, and dove into the magic that is all around Detroit is one of my favorites.    I may not be a 4th generation conjure woman, I may not have native or African blood in my veins, but I dove into the world of conjure and know that I have come home.

The Motor City Hoo Doo line was created through the exploration of this powerful, primal tradition, and the recipes came from the spirit of magic that is all around us in the badass city of Detroit.  When you light a Motor City Hoo Doo  candle or use an oil you can feel the primal power of rebirth letting your own magic awaken and empowering your intent.

So go ahead and Keep it Magic and tap into this intense power!

Pt 2 - The Primal Power of Conjure 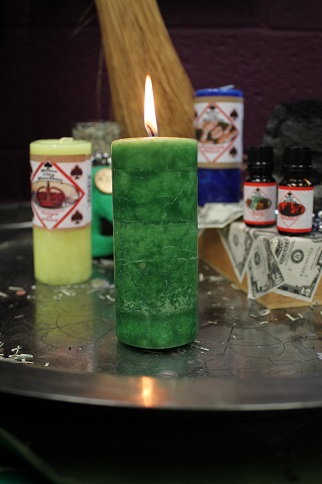 To understand the core and power of hoodoo you have to dive into its history.   It is the push of history, the push of the oppressed into unfamiliar and repressive situations that created the hoodoo we know today.  This is not a tradition that follows a straight line, but one that curves upon itself in repeating stories and situations.   This spiral joins it with other conjure traditions from other oppressed, degraded and repressed people.  This journey through history that hoodoo takes you on is critical because it takes you from that place where victims live in fear to the mountaintop of glory where we experience personal power.   Hoodoo is a pathway through our own self imposed oppression into the root of your soul where you find the wound, heal it, and then experience a life of spiritual freedom.

From the forests of the Congo, through the Blood Coast of Africa to the plantations of the south, hoodoo was kept hidden, yet kept alive.  In the Appalachian hills you will find people of the earth who live and die by conjure, keeping the old ways alive through faith.   In the southern plains you will find first nation people who held strong to their connection to spirit and magic even while their people were being systematically obliterated.   In the cities you will find Jewish immigrants who struggle to carve out a community and stay connected to the sacred and mystical teachings that hold them together.

All of these people, conjurers each one, know the hell of oppression, segregation, and institutionalized prejudice.  Yet, they manage to thrive, find joy, build families, and stay strong both individually and collectively.  That is a primal power, to burst through those societal limitations and work from a place of divine authority.  To do this, magic has to come from the root of your soul, the root of your pain and make change where change seems impossible.   That is the power of conjure.

When you are working with the divine allies of conjure they know your pain and can lend you the strength you need to break free of the oppression that blocks you.  When you are tapping into the long standing forces of conjure you are tapping into primal creative forces. Crown of Glory,Come to me, High John,Fiery Wall of protection, Helping Hand all have a collective power behind them.  When you call that energy up it meets you where you are and help create primal, root healing, magical change.

Because nobody can touch your badass primal hoodoo.  Now, go make some change. 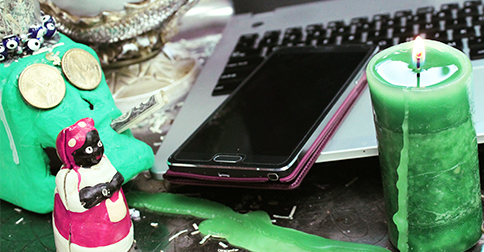 We are not struggling with life and death on a daily basis like our ancestors did.  We have freezers for our food, over stocked groceries stores, transportation, shelter and heat in the winter and even cooling centers in the summer.    Today, our problems are first world problems and are about moving from surviving into thriving.   So, how does this old school country conjure fit into our new school city needs?

It’s hard to get away with plucking a black rooster on steps of the courthouse, even at midnight, without getting arrested.   There are very few crossroads to bury things in the center of since they have all been paved over.   When is the last time you were close to a natural body of water that you could throw a four thieves bottle into?    It’s time to step into the 21st century with our magic and start finding the things that will work in today’s world.

Crossroads – They are every quarter mile in the city so how do you know which ones to use?  Crossroads that unite communities or cross boundaries add to the crossroad energy.   Crossroads that are in the center of a community are also an excellent choice.

Laying tricks – Trying to lay powder in your boss’ office can cause a work shut down while they test the substance for anthrax!   It’s time to get creative with laying of tricks.  Give them a pen that has been doused in the oil or powder.  Put a little oil on your report or take them to lunch and have them sit in a trick that you put in the passenger seat.   No matter who the trick is for, name it to the person for whom it is intended.   When you name it the trick won’t affect anyone but them.

Setting lights – (burning candles) Not many of us have the luxury of lighting a 7 day candle and letting it go until it burns out.  We have to extinguish the candle before you leave for work or even before you leave the room because of your pets or kids.   Go ahead and extinguish that candle and say, “I snuff our flame in this world as it is lit in the next, continuing my magic.  I will relight you again at ______ to reaffirm this work.”   Make sure you light it when you promised or that magic you are working will slowly fade away.

Personal concerns – Anything that is connected to the person you are working a trick on or magic for is a personal concern.  The obvious ones are a tissue, a piece of clothing, spit, hair, etc.  Then there is their signature or a picture but that is not as powerful.  Think about what is unique to that person and add it to their picture; their Social Security number, their cell phone number, their email address, facebook ID, or any social media ID.   Think about printing out a profile picture of them, especially if it has been up for a while and no one else is in the picture.   This is how hundreds of people identify with them so why not?  The point of a personal concern is to tap into the energy of the person who you are working magic.  When you don’t have DNA, stack your personal concern with everything you can that connects the magic to them.

It’s ok to update and evolve the conjure that was taught back in the day.  The symbology and sympathetic magic that they used back then rang true for their times.   Ring your conjure with today’s 21st century bell and work your computer, your phone, your car, your internet.   Work with what makes sense for you.   If you need a mojo bag and an empty Altoid tin inspires you, work your mojo in there!   Recently I used a purple Crown Royal bag for the best Crown of Glory spell ever.   I even used a cola and a Mentos to put some energy into a project.   How about Crystal Skull vodka bottle for some spirit work?

Putting out a resume via the internet?  Put the oil on your hands before you type up the resume and send it off.   Dating online?  Print out your profile picture and work your conjure on it.  Waiting on a phone call?  Pull up an image of the Page of Swords on your phone and leave it there until they call.

Go have some 21st Century conjure fun and let me know what you come up with!

Jacki Smith is the founder, resident enchantress, and trouble maker at Coventry Creations.  Follow her articles here on CoventryCreations.com and listen to her and Storm Cestavani on Keep It Magic (Blog Talk Radio).   Find her on Facebook, Twitter and Instagram or drop her a line through Coventry!