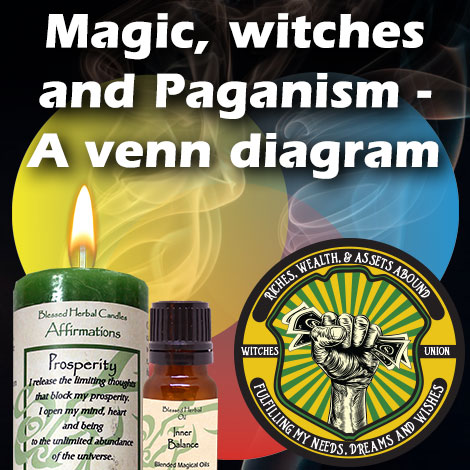 I read a random question on social media, “Are Pagans addicted to magic?”   I found that a fascinating question because it assumes so many things. It assumes that all magical practitioners are pagan, and all pagans practice magic.  The comments went to referencing witchcraft and magic and paganism all as the same thing. It’s not the same thing, you can claim all three things, but they are stand alone and deserve their own definition.

Magic – My definition is;  intent combined with belief and actions toward a specific goal that is seemingly outside their normal influence.

1a : the use of means (such as charms or spells) believed to have supernatural power over natural forces

b : magic rites or incantations

2a : an extraordinary power or influence seemingly from a supernatural source

b : something that seems to cast a spell : enchantment

Pagan – My definition is; someone who practices a polytheistic religion outside of the Judeo-Christian, Islamic traditions.

1: heathen 1; especially : a follower of a polytheistic religion (as in ancient Rome)

2: one who has little or no religion and who delights in sensual pleasures and material goods : an irreligious or hedonistic person

Witch – My definition is; a self assigned title to someone who works with the unseen energies around them to empower themselves and others to create the life they desire.

Merriam-Webster gives witch this definition (which I disdain):

1: one that is credited with usually malignant supernatural powers; especially : a woman practicing usually black witchcraft often with the aid of a devil or familiar : sorceress — compare warlock

3: a charming or alluring girl or woman

4: an adherent of Wicca

These three titles are all interrelated and are part of a description, yet they are not synonyms.   A witch is not necessarily pagan. She/he may not actually practice magic. She/he may be a healer in their craft, a seer or a counselor.   A Pagan may be wholly focused on their religion and their connection with the earth and not cast one spell or magic. They may not consider themselves a witch.  Magic can be performed by anyone no matter your religion or personal status.

To get back to that original question, are pagans addicted to magic? No.   Can a person be addicted to magic? Yes, with a qualification. Anything can be an addiction or an escape from personal responsibility.  If you are using magic to avoid your own accountability, then it may be a problem for you. If that person is also a pagan, that is a coincidence.

I know several pagans that are so focused on the goddess, everything is a hymn to Her, the goddess.   It’s such a blessing to watch their connection with the feminine mystery and the awakening of the divine within themselves.  I am humbled by them. They feel intentional magic isn’t necessary if you are in the flow of the goddess, because everything within her flow is magic.

I have met a few witches that are fine herbalists and healers.  That is their magic and yet they do not call it that. They get in the rhythm of the body and nature and help the body do the healing work.  They move energy and bring blessing but would never call it magic.

I have customers who are devout Christians who believe in the power of magic and spell work.   They work their bible and lay on hands and conjure up magic.

I also have many clients who claim none of those titles and believe in working with the unseen energy around us to facilitate change.  The laws of attraction, positive thinking and getting in-tune with their inner divinity is at the core of their spiritual practice. I love it when they say, “I’m not sure if I believe in magic”, because my answer is always the same.

MAGIC BELIEVES IN YOU

To me, in my spiritual practice, magic, healing, intent, and blessings are all part of the same connection we have with divinity.  I see that we co-create with our higher powers and there are many ways to get there. In the end, I believe we are all Witches. It is this desire to reclaim and redefine that term that inspired me to start the Witches Union. We are all magical and we can all be witches if we choose.  I imagine a witch being the empowered woman of the tribe, the badass that is not waiting for permission to live her life, the one that makes the difficult choices to take right action. I see the witch as the woman with healthy boundaries and empathy for the greater good. I see the Witch as the wise woman, social worker, healer, guide, counselor and ass kicker. I see a witch as woman or man, transcending all gender.

I proudly wear my Witches Union patch and hand out Witches Union membership cards to every person with a spark of intent within them.  We are all individuals carving out a blessed life and if we recognize that within each other, we will be a strong community.

Step into your witch power and find your magic!  It’s life affirming! Start with this little magical combination:

Anoint the candle, the patch and yourself with the oil.  Think about the areas in your life you are prosperous (for the good and the bad) and where in your life you want to be prosperous. Write out where you want your prosperity to shift to, anoint the paper with the oil and place it under the candle holder for the Prosperity candle.  Place the patch next to the candle. Let your intent for this new prosperity fill you, spill out of you and into the greater universe and into the patch.  Let the candle burn for a few hours and make sure to extinguish it before leaving.

Carry the patch with you and pay attention to the subtle shifts of energy as your prosperity moves into the area you desire.  You are now a witch who practices magic! Enjoy, wear your patch proudly and let your power stand tall and bright!

Where ever you fit on the venn diagram, whatever you practice, embrace it and let it bring balance into your life.

Remember, if you keep your magic close with a daily practice, it will keep you close in it effectiveness and speed.

Live the Magic with Jacki Smith though her blogs, books and products. www.coventrycreations.com.